Question and Answer Sessions for May and June 2014

How did humans come to be?
Video: Where and When Did Humans Evolve?
If humans evolved from apes, why are there still apes - A pictorial explan﻿ation
Human Evolution Timeline

Why are there craters in (on) the moon and how did they get there?
Meteors and other rock-type space stuff hit the surface of the moon and because the moon doesn't have an atmosphere (a layer of air) to cause friction with meteors and burn them up, they are able to hit the moon pretty hard.  The crater is the scar on the surface of the moon from the impact. Happens all the time.  Earth gets bombarded by meteors and rock-type space stuff all the time too but most of these burn up in our atmosphere (we see them sometimes, and we call them shooting stars).
A NEW CRATER APPEARS ON THE MOON DECEMBER 18 2013

What is the moon made of?  Like the Earth, the moon boasts a crust, mantle and core.

The crust of the moon is made up of concrete-like regolith.

The mantle of the moon is made up of solid rock (lithosphere). Most of the interior of the moon is made up of the lithosphere, which is about 620 miles (1,000 km) thick. As this region melted early in the lunar life, it supplied the magma necessary to create lava plains on the surface. However, over time, the magma cooled and solidified, thus ending volcanism on the moon.

Deep inside of its interior, the moon may have a solid iron core surrounded by a softer, somewhat molten liquid iron outer core. The outer core may extend as far out as 310 miles (500 km). But the small inner core only makes up about 20 percent of the moon, compared to the 50 percent core of other rocky bodies.

The moon is the second-densest body in the solar system, beaten by Jupiter's moon, Io. The separation of its interior into layers was likely caused by the crystallization of a magma ocean shortly after its formation.

Find out more about the Lunar Reconnaissance Orbiter

What happens when you send a rover to space, does it ever come back?  Nope

What is the largest moon?  Ganymede, a moon of Jupiter
Ganymede, a moon of Jupiter, is the largest in this solar system. At 5,268 km at the equator, it is larger than Mercury, the dwarf planet Pluto, and three times larger than the Moon orbiting Earth.  Recently scientists discovered that Ganymede may have layers of ice oceans which could potentially support life as we know it.  Here's a link to the article describing the latest findings:
Jupiter Moon's 'Club Sandwich' Ocean Could Potentially Support Life
Video all about Ganymede

How many planets have rings and which are they?
Four the planets in the Solar System have rings. They are the four giant gas planets Jupiter, Saturn, Uranus, and Neptune. Saturn, which has by far the largest ring system, was known to have rings for a long time. It was not until the 1970s that rings were discovered around the other gas planets. 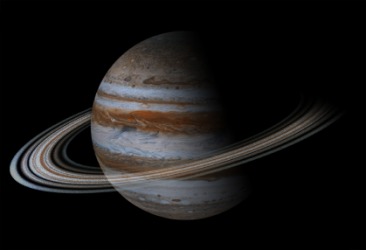 Why are there colors instead of black and white? (Where does color come from?)

This is actually a big question.  First you need to know that the colors we see are actually only a very small portion of ALL the light waves, which we collectively refer to as the Electromagnetic Spectrum.  Radio waves have the least amount of energy and the longest wavelength.  Gamma waves (or rays) have the most amount of energy and the shortest wavelength.  Only a very very small part of the electromagnetic spectrum is visible.
Where does color come from 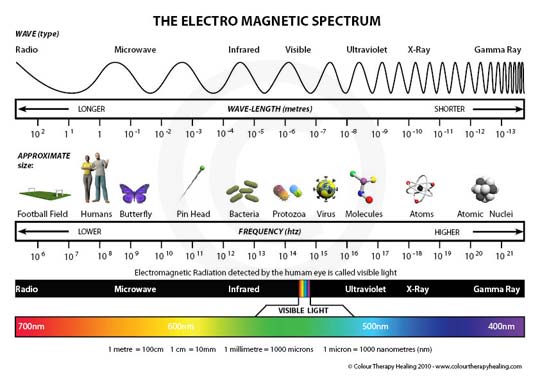 Where do rainbows come from?
Recipe for Rainbows
Light from the sun or from a lamp seems to have no particular color of its own. It appears simply to be "white" light. However, if you pass the light through a prism, you can see that it actually contains all colors, the same effect that occurs when water droplets in the atmosphere separate light into a rainbow.

If your question included why are things the color they are:Light waves reflecting off of something that absorbs all the other light waves in the visible light spectrum.  Now sometimes light can act like a particle but let's just talk about light as a wave for this question.  A colorful object such as a leaf appears green because when white light strikes it, the leaf reflects only the green wavelengths of light and absorbs the others. A white object such as a white flower appears white because it reflects most of the wavelengths that strike it, absorbing relatively few. Inks, dyes, or pigments in color prints also selectively absorb and reflect certain wavelengths of light and so produce the effect of color.
Bill Nye explains light and color (0:50-2:44) 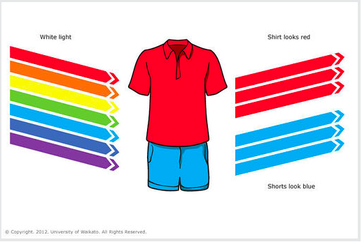 http://www.sciencelearn.org.nz/Contexts/Light-and-Sight/Science-Ideas-and-Concepts/Colours-of-light
Are you color blind?

There is so much pollution in the sky. What happens to it, where does it go, and why don't we see it and does it go into space?

Weather is an important part of air pollution picture. It affects the movement and build-up of pollutants in our atmosphere.
Wind can carry emissions large distances.
Sunlight drives photochemical reactions, generating smog.
Rain and snow wash pollution out of the air.
Air Buoyancy Smoke rises. When pollutants are emitted from smokestacks, tailpipes etc., they are warmer than the surrounding air and tend to rise. The hotter the emissions, the faster they will float up into the atmosphere. This follows the same principle as a hot air balloon.
Wind Wind carries many pollutants long distances from their sources.,
Dispersion Air pollution reaches the ground by mixing, or by wet or dry deposition. Dry deposition is the settling out of dust particles from the atmosphere due to the force of gravity. Larger particles settle out faster, while the smaller, more dangerous particles remain suspended longer. Wet deposition occurs when pollution dissolves in rain or snow. Precipitation cleans most of the pollution from the air.
Did you know? Acid rain is the wet deposition of sulphates and nitrates, more than half of which come from the US.
Reference

When comets (meteors) come down to earth, what makes them catch fire while they're plummeting towards earth?
Friction from Earth's atmosphere

If a 300 foot asteroid hit Earth, how much of an impact would it make?
If the asteroid is as big as a 20-story building (200 feet on a side), it has an amount of energy equal to the largest nuclear bombs made today -- on the order of 25 to 50 megatons. An asteroid like this would flatten reinforced concrete buildings five miles from ground zero. It would completely destroy most major cities in the United States.
Reference 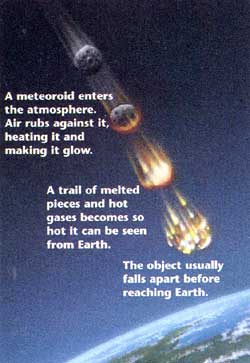 What is the inside of a tree trunk made out of?
Tree Physiology
Tree Cookie
The xylem of a plant is the system of tubes and transport cells that circulates water and dissolved minerals.
The phloem cells are laid out end-to-end throughout the entire plant, transporting the sugars and other molecules created by the plant.
The cambium cell layer is the growing part of the trunk.